It depends on the retailer and the state, 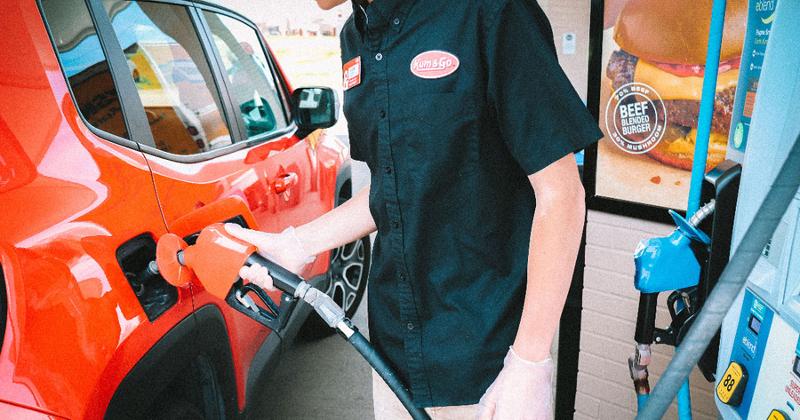 DES MOINES, Iowa — The COVID-19 pandemic has raised cleanliness concerns at the fuel island, with viral social media posts cautioning about the dangers of touching a gas pump contaminated with the coronavirus. But some retailers have found opportunity in these concerns with the return of full-service fueling. This spring, several small operators in California, Alabama, Kentucky and Florida began offering customers the choice of having their fuel pumped by an attendant. Many continue to offer the service as the pandemic continues.

One of the first chains to debut the service was Des Moines, Iowa-based Kum & Go LC, which launched a full-service fueling program, along with curbside delivery for store purchases, at its nearly 400 stores in 12 states. To use the service, customers call the stores’ main number when they arrive at the fuel pump. An employee accepts their payment–credit cards or cash–and runs the transaction before fueling. Employees change into a new pair of gloves with each transaction. Kum & Go offers the service from 7 a.m. to 7 p.m. each day.

“We are always looking for safe ways to better safeguard our customers and associates,” said Tanner Krause, president of Kum & Go. “Going back to our roots to provide a full-service fueling option can help people maintain social distancing and avoid common touchpoints.”

Kum & Go’s full-service fueling and curbside pickup pilot debuted in early April and it is still in effect today. The retailer is No. 18 on CSP’s 2020 Top 202 ranking of c-store chains by number of retail outlets.

Also in April, West Des Moines, Iowa-based Hy-Vee Inc. debuted free full-service fueling at its more than 165 convenience stores in eight states, including at its Hy-Vee Fast & Fresh stores. Like Kum & Go, it offers the service daily from 7 a.m. to 7 p.m. Customers can also order food and other items from the c-store for delivery to their vehicle during fueling.

Full-service fueling is still available to all Hy-Vee fuel customers. Hy-Vee is No. 45 on CSP’s 2020 Top 202 ranking.

Offering full-service fueling can be a complex decision, especially for retailers with large fuel islands. Two large chains told CSP they have considered offering the service, but the logistics of the offer–how many employees to assign to fueling and which dispensers to dedicate to full service–have proven difficult to resolve. The retailers also expressed concern about increasing employees’ exposure to the coronavirus.

Meanwhile, New Jersey, the only other state to restrict self-service fueling, continues to enforce its ban, despite efforts by independent fuel retailers in the state to enable the practice during the pandemic.

,It depends on the retailer and the state,Read More