A look at how stay-at-home orders affected gas buying across the country, 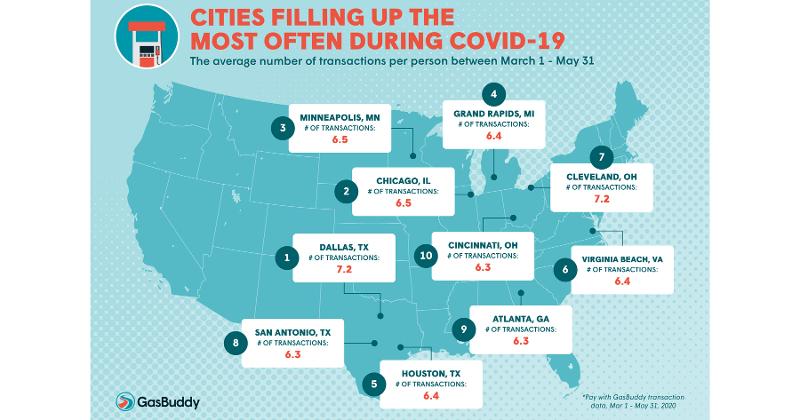 BOSTON — GasBuddy recently shared how the top 50 most populous U.S. cities ranked in fueling activities during a pandemic at the height of stay-at-home orders.

On average, a person in Dallas visited the pump nearly twice as often as one living in Las Vegas between March 1 to May 31, 2020, according to the new report. In the same time span, a person in Birmingham, Ala. bought 31% more gasoline than someone in Los Angeles.

Demand for fuel has been at record lows across the nation since the COVID-19 outbreak. According to Pay with GasBuddy data between March 1 to May 31, American consumers made on average 2.8 fuel transactions per month, a drop from the usual 4.5 times per month prior to the outbreak.

Cities that saw more frequent visits to the gas pump were clustered in the Great Lakes region, five out of the top 10, and Texas, three out of the top 10. While cities with the fewest fuel transactions were centered in California and the East Coast.

Various factors play a role as to why there were more fueling activities in certain cities than others.

,A look at how stay-at-home orders affected gas buying across the country,Read More