Retailers say fast-growing category not hurt by COVID-19 yet, 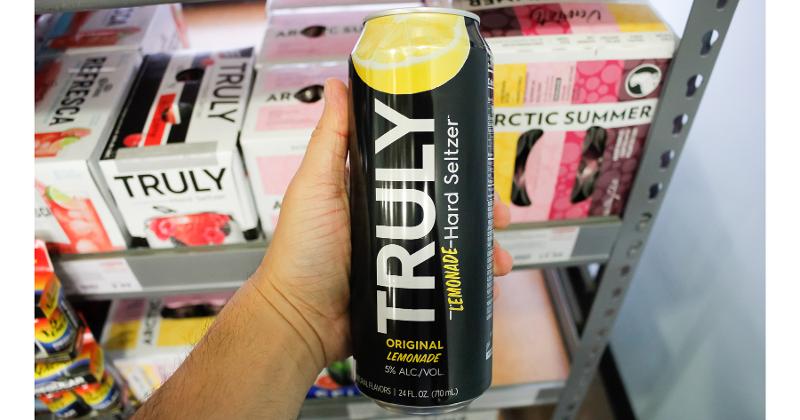 CHICAGO — Hard seltzer is so popular, the beverages nearly sell themselves.

At Kum & Go, hard seltzer is one of the chain’s strongest growth segments, with sales up by triple-digit percentages vs. the prior year. Beyond featuring new items on signage, the Des Moines, Iowa-based chain doesn’t price promote hard seltzer outside of any manufacturer programs.

“Our perspective is: This category is growing so fast, there is no need to add … promotions to the market,” said Chris Long, director of age-verified products, and Christian Rogers, alcohol category manager.

According to IRI, convenience-store sales of flavored malt beverages–a category that includes hard seltzers–rose 42.5% to hit $2.3 billion in the 52 weeks ending March 22, 2020. Case sales rose 39.2% in that same time period.

As early brands such as White Claw from Mark Anthony Brands and Truly from the Boston Beer Co. established a lead, major brewers have had to play catchup in the past few years, said Nathan Greene, consulting analyst with New York-based Beverage Marketing Corp. Over the past several months, Molson Coors Beverage Co., AB InBev and Constellation Brands have rolled out their own hard seltzers.

The question is, how far can innovation and consumers’ thirst for adult refreshment go in keeping hard seltzers ahead?

“As White Claw and Truly were first to market and put their stamp on this category, a newcomer would have to have very deep pockets to buy the customer,” Bates said. She cites Anheuser-Busch’s Super Bowl ads for Bud Light Seltzer as an example of a manufacturer heavily investing in its brand launch.

“White Claw and Truly have great products and have a dominant market share currently, but other brands will innovate and be successful as more consumers and products are added,” they said.

Greene of Beverage Marketing Corp. provided insight into how some of these new launches were performing during Beverage Industry’s State of the Beverage Industry 2020 webinar, held in April. Bud Light Seltzer did well after its January launch, but it has had some issues with “rebuys,” or repeat purchases, Greene said.

“Consumers may very well be using it as a steppingstone to enter the category,” he said. In its first year, Bud Light Seltzer took in about $18.7 million in sales in c-stores, according to IRI data for the 52 weeks ending March 22.

Corona Hard Seltzer, from Victor, N.Y.- based Constellation Brands, had a strong launch in March. This is despite reports this spring that some consumers didn’t want to purchase Corona-branded beer due to name confusion with the coronavirus, Greene said. The hard seltzer had taken in about $16.4 million in c-store sales as of March 22, according to IRI.

The latest addition to the Truly line–Truly Lemonade–has had glowing early feedback, Greene said. Meanwhile, White Claw 70, which has 70 calories per 12-ounce can, as opposed to the classic version’s 100 calories, has had strong test market feedback.

Joining these brands are Vizzy, which Chicago-based Molson Coors Beverage Co. introduced in April, and its upcoming Coors Hard Seltzers line, slated for a July launch.

“Overall, we are extremely pleased with our alcohol category performance this year, and believe the innovation (including seltzers) in 2020 is some of the strongest in recent memory,” they said. “The suppliers really brought their A-game.”

Hard seltzers started with a strong following from women, millennials and higher-income households. Among ethnic groups, white consumers have the highest absolute hard seltzer incidence at about 19%, while black/African Americans, Hispanic/Latinos and Asian ethnic groups all have an incidence rate of about 12%, according to a March 2020 survey from New York-based Cowen Inc. The survey also found that when it comes to income levels, the highest incidence was among consumers in the $50,000 to $99,000 income cohort, at about 38%. The lowest incidence, about 17%, came from respondents in the lowest-income cohort of less than $25,000.

Hillstrom predicts this expanding customer base will also lead to more diversification in products from manufacturers.

“Expect to see seltzers with a broader ABV range–for example, White Claw 70 at 3.2% vs. Four Loko Seltzer at 14%. Also expect to see new attributes entering, such as organic and natural flavors,” she said.

“Combined with the low-sugar, low-carb and under-100 calorie attributes most brands have, seltzers are a force to be reckoned with,” she said.

Seltzers, as part of the flavored malt beverage segment, have helped lift a struggling beer category.

“[Hard seltzers] are bringing new drinkers into the segment, and a good portion of the consumer base is sourced from wine and spirits,” said Marty Maloney, manager of media relations for Molson Coors Beverage Co.

The company’s Vizzy is available in four flavors, which are sold in 12-ounce variety packs. The popular Pineapple Mango is also sold in six-packs and in single 24-ounce cans. Vizzy’s target customer base is 25- to 35-yearolds who are mindful about their choices and increasingly looking beyond the absence of sugar and calories and instead are valuing the presence of positives, Maloney said.

Vizzy’s “positive” is that it’s made with antioxidant vitamin C, which is a superfruit that contains about 30 times more vitamin C per cup than an orange, according to Molson Coors.

Long and Rogers of Kum & Go said hard seltzer volume is sourcing mostly from beer, but there is also pull from wine and liquor.

“Some of the main reasons seltzers continue to return such a strong performance is they mix well with other beverages and do not give you an overly full feeling when consumed alone, in addition to the low-/ no-sugar, low-calorie and low-carb options the category offers,” they said.

Even with great sales and innovation in hard seltzers, shelves are only so big.

“With so many new seltzers on the market, market spend is a huge factor in determining what items we go forward with,” said Bates of Yesway and Allsup’s. “National data shows seltzers are roughly 3% of the market share but were about 40% of the new items added by suppliers this spring.”

Some analysts question what is driving the explosive growth of hard seltzers overall, and how sustainable the pace is.

A few years ago, the hard cider industry spent nearly $65 million a year in the category–and the industry grew by about 50%, said Brian Sudano, managing partner of Beverage Marketing Corp., and a speaker at the State of the Beverage Industry 2020 webinar.

“When you spend over $1 billion against the category, you’re going to see explosive growth. And the question really becomes: How sustainable will this be next year?” Sudano said.

He pointed out that Mark Anthony Brands plans to invest more than $500 million in the White Claw brand, including adding new production facilities in New Jersey and Arizona. It also is releasing nine new SKUs of White Claw and White Claw 70.

Boston Beer plans to spend up to $115 million in 2020 on a new can line and the Truly Lemonade launch. And Anheuser-Busch InBev has slated about $100 million for marketing and innovating its Bud Light Seltzer, Bon & Viv, Natty Light Seltzer and Social Club Seltzer brands.

More recently, sales of hard seltzer benefited from the pantry load increase seen across the traditional beverage alcohol categories during the COVID-19 pandemic, according to Cowen.

Consumers who buy hard seltzer, who tend to have higher income, are also less likely to have been affected by unemployment due to the coronavirus. About 38% of hard-seltzer consumers have an annual income of $50,000 to $99,000, a group that has fared relatively better than lower-income consumers in terms of the early unemployment trends stemming from COVID-19, according to Cowen.

Since January, year-over-year sales of hard seltzer have increased 232% on average in all U.S. markets, which compares to 0.6% for the total beer category in the same period.